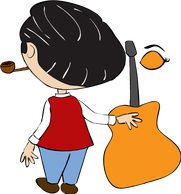 Ken Sykora was one of Britain's best loved guitarists and most popular radio presenters, whose "golden voice" entertained millions at the peak of his career with the BBC in the 60s.

A gifted self-taught jazz guitarist inspired by Django Reinhardt, his fledgling musical career was interrupted by the 2nd World War. He survived his call up to the Far East and malaria, returning to complete his university degree and become a teacher. After an eight year break, he managed to re-establish himself as a musician and band leader in the 50s London jazz scene. But rock’n’roll soon arrived, tastes quickly changed and Ken’s style of music fell out of fashion.

He moved towards radio broadcasting and a career that ended up spanning four decades and over 3,000 radio programmes. His most significant programme, Guitar Club, helped popularise the instrument in the UK in the 50s and inspired many future guitar stars: McCartney and Clapton were regular listeners. He devised and presented numerous shows based around the things he loved: music of all genres, fascinating facts and food - all served up with a slice of Sykora humour. He became a respected interviewer, gaining access to high profile artists and celebrities, such as Duke Ellington and Bing Crosby. Through his radio work, he was able to share his incredible musical knowledge and in particular to shine the light on less well-known artists.

His passion for food and sailing took him and his family on a brief voyage of adventure in the early 70s into a career as a hotelier and chef, on the West coast of Scotland. The adventure was short lived and he returned to radio, becoming a popular and ubiquitous voice on Scottish radio for another two decades. His last major radio series, the 1988 award winning Eater's Digest, combined his love of food, music and facts and returned him once again to the national airwaves across the UK. He retired from broadcasting in the mid 90s and died peacefully in 2006.

A talented guitarist and a tireless promoter of the guitar, Ken Sykora is part of Britain’s musical and radio heritage.
﻿Produced by