Ken Sykora was a man that was truly dedicated: to his art, to his family, to his work. He believed in giving his very best to everything he did. This can be clearly seen through the immensely high calibre of his work as a musician and a broadcaster. Take a look behind the scenes and you can see the tremendous effort he put in to making it all look effortless. Nor did he judge quality of others' work on the strength of a reputation; he used his own judgement and he trusted in it.  These are qualities that were rare when Ken was plying his trades, and they are all the more rare today. It could be argued that Ken did not quite achieve the success as a musician, or garner the renown that his talent deserved. But such was his character, that he did not play or broadcast for accolades. He did so to share with others the amazing artists that brought him so much pleasure, and he wanted to do so with as many people as he could.
It is these qualities of integrity and dedication, mixed with a joie de vivre that captivated us and compelled us to tell his story. It was also a desire to 'put the record straight' about Ken's work and achievements, which seemed to be strangely lacking from the history books. Ken lived through interesting times. He was both the victim and the beneficiary of fortune: what might have been and what was. Happily, he left it all there to be discovered and we have done our best to decipher, to translate and leave a legacy that will assure Ken's rightful place in the history of British jazz and broadcasting.
We are grateful to Duncan, Alison and Dougal Sykora for entrusting us with the story of their father and their family; also to all the project contributors and backers that gave their time and resources so generously, and without whom the project would never have been realised.
We are delighted to find that, today, people from all over the world are coming across The Man with the Jazz Guitar, watching the film, listening to a Guitar Club, playing his music, buying a postcard, or just reading one of Ken’s unique, off-beat anecdotes.
Ken's favorite piece was Django Reinhardt’s Nuages, so it is fitting that Ken and his work are now in the cloud, forever. 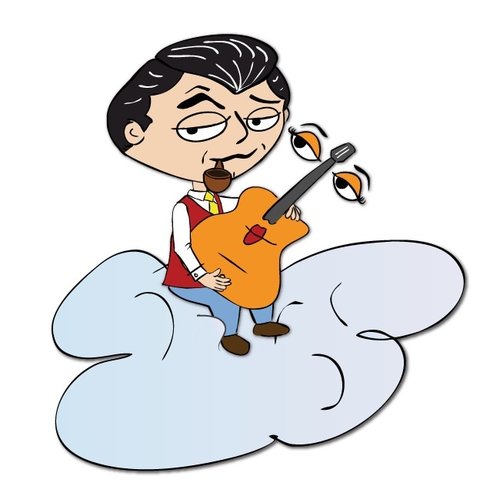 This project was produced by Marc Mason and Linda Chirrey of Five Feet Films.
﻿Produced by